The PAtools FPGA Board expands your test stand automation with PAtools TX to include ultra-high-speed simulation and control functions.

The PAtools FPGA Board is installed in the process control computer and runs fully integrated into the PAtools runtime system.

The model is developed with Simulink using the Xilinx modules. The model is simulated and debugged offline. The results of continuous Simulink models can also be compared with those of the discrete models. The finished model is compiled in VHDL code. It can be managed as an object in the PAtools database. In addition, the VHDL code can be integrated into the executable PAtools test description and downloaded from the PAtools runtime system with partial reconfiguration to the FPGA module. During the runtime of the model, a UDP interface is used for diagnosis at the Windows PC with a data rate of up to 60 kHz.

Up to 64 PCIe channels can be integrated into the PAtool test by drag & drop. These channels are used for the cyclic data exchange with the PAtools process image. AXI channels offer a further possibility of exchanging data. The number of such channels is practically unlimited.

I/O interfaces to the test stand are provided by FPGA Mezzanine Cards (FMC). The FPGA Board can thus be linked to practically any test stand equipment – from the analog input to the inverter controller. A serial high-sped interface is used for bidirectional data exchange with VES battery simulators and electric motor simulators with data rates of up to 120 kHz.

We are happy to help! 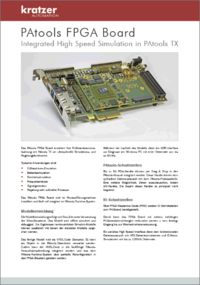