Achim Ewenz rewarded for his efforts with a well-deserved second place. 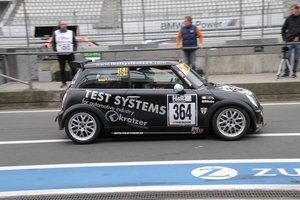 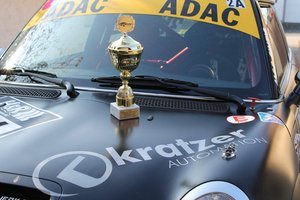 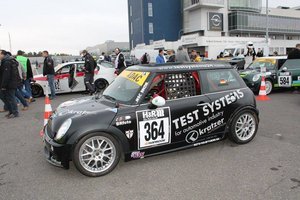 A total of 197 teams met in the finals of the RCN “Nordstrecken” (northern route) Challenge Nürburgring mass motorsport series that took place on the Grand Prix shorter alternative circuit with the “Nordschleife” (24,358 kilometers).

Achim Ewenz, Sales Manager for test benches at KRATZER AUTOMATION, chose to drive single handed the 3h race in a BMW Mini Cooper S Works (with Test Systems insignia) while most other teams started with two or even three drivers.

Unfortunately, an involuntary turn during training ended at a concrete wall. Result: rear left suspension was bent. This put an end to the training session and the race almost ended prematurely for Achim.

The required spare parts had to be brought to the circuit very rapidly as the possibility of starting the race would be zero without them. The team moved in top gear and a few minutes before the race was due to start the Mini was up and running again and ready for the race.

In spite of the accident during training his efforts were well rewarded with second place.

Congratulations to Achim Ewenz and his team for an outstanding team performance!