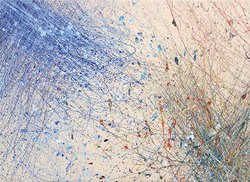 Born in 1991 in Bielefeld, he has lived in Berlin since 1995.
Since 2011 he has been working full-time as an artist in the Thikwa Workshop for Theatre and Art at the nbw, alongside 43 of his artist colleagues.
As a member of the ensemble of Theater Thikwa e.V., Sammy Serag has performed and danced on stages beyond Germany's borders.
In the studios he worked in the visual and plastic fields, often with themes related to graffiti. For example, he folded underground carriages out of paper and covered them with graffiti or built a fatcap about 40 cm high.
Sammy Serag often dealt with style writing and the shaping/construction of letters. Sometimes he did this meticulously with a ruler for the 3D blocks. But he also turned to wood, and succeeded in making accurate - longer cuts on the crack.
As the further development of graffiti styles stagnated somewhat, the final decision was made to turn to a rather contrary technique. One that is (apparently) less controllable. Also in an abstract way

Sammy Serag has been working with Abstract Expression or Action Painting since the end of 2019 and has the intention of always arranging new colour compositions. Experimenting with different utensils at the beginning, he also found interest in creating different formats for his works. Since the entire studio did not necessarily have to have its walls redesigned, hanging transparencies were mounted around his work area, also so as not to transform his colleagues in terms of colour. The whole process - working out different wooden frames/constructions, covering, priming, choosing colours up to the last accent - is always an experience to look forward to, even as an observer. (Of course, also with a mixture of daily form dependence.) After all, you don't know what to expect at the end.

In his free time, Sammy Serag likes to work out at the gym and is interested in different languages and culinary delicacies.