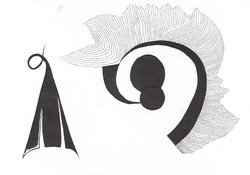 The artist (born 1989, Greiz) lives and works in Berlin. Since 2008 he has been a guest student of Hanns Schimansky at the Kunsthochschule Weißensee. It is his first solo exhibition in the gallery ART CRU Berlin.

Oskar Zaumseil's drawings oscillate between abstract free-floating compositions of geometric forms and works with reduced figures reminiscent of animals or fantasy figures. In recent years, the artist has concentrated primarily on working with dark palettes of color. Dominant are the grey of the widely used pencil and the black of the fibre painters and coloured pencils with which he lends his works an intense black depth in countless, densely applied strokes. Zaumseil complements the drawings by using various printing techniques, such as lithographs, etchings or linocuts. He makes these in the printing workshop of the Kunsthochschule Weißensee, where he has been a regular guest student for several years.

With special ingenuity Zaumseil creates dragons, spiders, rabbits, octopuses, aliens or masked persons who float through his space- and timeless compositions. Their mouths - which seem to play a central role in the works - are often equipped with pointed teeth, giving an ambivalent dominance to the vividly drawn figures. The figures speak, without the use of words, in their own pictorial language. In one of his works he used newsprint, which originally only showed a close-up of a smiling mouth. Zaumseil used linoleum printing to place a figure on these red lips, which stands out from the background with its inner tension and creative form.