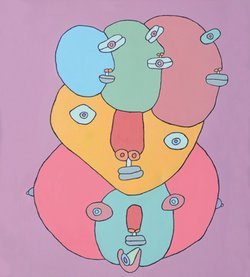 Jean-Marie Heyligen's creative universe is an infinite labyrinth in which every path leads the spectator to a vast, alien world.

Beginning with embryonic female forms in dazzling colours in his paintings, we accompany Jean-Marie into the corridors of his perception. If one loses oneself in a supposed impasse, one finds the artist again. At a crossroads of new creative paths. But if you observe Jean-Marie day after day and get to know him better, his protagonists become pure facades. They defend his supposedly own perception, but he lives on the other banks of the river - in our world.

Jean-Marie always surprises us with the infinite vastness of his works. He is a king in love with life and women. Women are a central and recurring theme in his artistic work. They represent his muse. He attracts them and decorates them over the years with the most beautiful colours of his colour palette. He paints them with radiant colours and presents them with enchantingly generous forms. Jean-Marie is a passionate painter of mermaids and mermaids.

His arrival at Home André Livémont in Aubechies opened new doors and perspectives for his creativity. There he visited painting and sculpting studios, where he could let his unlimited imagination run free.