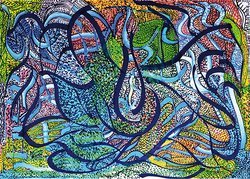 The artist Haci Sami Yaman is blind. And there are no viewers of his artworks who don't ask themselves how this can work. Due to the quality of his paintings, the fact of his blindness is sometimes even directly doubted. Like many blind people, he is not 100% black-blind, and as he himself says, it depends on his daily form and ability to concentrate what and how he can recognize. When Sami Yaman feels safe and comfortable, no longer afraid of unknown noises, knows the rooms and people he works with, he orientates himself surprisingly quickly in his surroundings.

Haci Sami Yaman has a great need to explain his pictures, he wants you to "understand" his pictures. Every line, every grid, every structure from which he builds his pictures mean something. He speaks of systems, circuits, planetary Structures. Of complex interactions, of currents and electrification. His images are networks, pixelations, data processing. He describes levels and planes, programming, amplifiers. Kabbalistic number systems are not strange to him and in some pictures he depicts quantum leaps. But his pain is also illustrated - he explains and levels pain frequencies. One can get the impression that he forgets, due to the strong impairment of vision, that the viewers see and couple with the mind via the eye and understand themselves seeing, so to speak.

Whatever means he uses to memorize the colours and put them together, however he finds his way around his format, by rhythmic tapping on the paper, or by the left hand, which always observes and feels next to or above the right, the result is alive and has to do with nature and creation. With abstract forms of nature, the cells, the networks and connections, the systems from which growth comes.